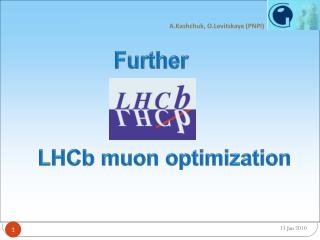 A.Kashchuk, O.Levitskaya (PNPI). Further. LHCb muon optimization. LHCb startup in December 2009 with bright success (!) shows that LHCb muon detector is operational However, its further optimization in 2010 is one of the main task Further Details - Does your work or volunteering role involve engaging or supporting men? if so, this training could be

Further workshops - . planning and evaluating effective practice with e-learning - a series of regional workshops from

Further information - Established use of eportfolios &amp; logbooks in the mbbs programme of newcastle university