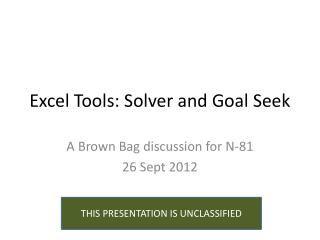 Excel 2010 - . what is an excel program ? . excel is a spreadsheet program that allows you to store, organize, and

Goal 1.05 - . objective: swbat- explain observations through a candle observation lab. warm-up. what is an observation?

Goal 2025: - To increase the proportion of americans with high-quality degrees and credentials to 60 percent by the year

Goal Seek and Solver - . goal seeking helps you. find a specific value for a target cell by adjusting the value of one

GOAL SEEK AND SOLVER - . both of these tools come with the standard excel package, but solver has to be installed. if it

Hide and Seek by Vernon Scannell - . before he got into poetry he spent time in tough occupations including boxing and