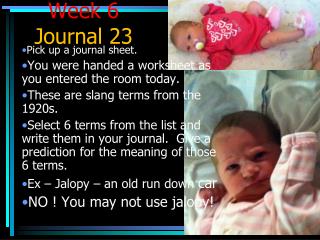 Week 6 Journal 23. Pick up a journal sheet. You were handed a worksheet as you entered the room today. These are slang terms from the 1920s. Select 6 terms from the list and write them in your journal. Give a prediction for the meaning of those 6 terms.

Journal - . differentiate between pleopods and periopods in a crayfish. please turn in crayfish dissection lab if you

Journal #3 - . what is a question you have that could be answered by a scientific experiment? write down the question,

Week 2- Tuesday - . what is the meaning of the “life”? look at the items on the back desk. (masking tape, beenie

BEFORE THE BELL: Get out your journal and writing utensil… - 2. in your journal write the following list:. need to