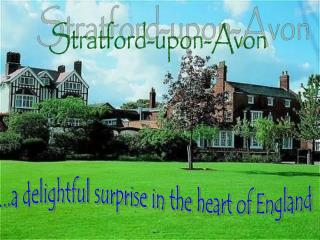 Stratford-upon-Avon. ...a delightful surprise in the heart of England. Stratford Upon Avon - . warwickshire england. flying alicante to birmingham. staying at a hostel in stow on the wold or

Stratford-upon-Avon - . one of the most famous english towns. situated on the west bank of the river avon, in the

Birthplace: Stratford-upon-Avon - All that glisters is not gold in the merchant of venice. all the world’s a stage, men

Stratford-upon-Avon , England - . in this house, in harley street, shakespeare’s father kept his shop. here you can

born in April, 1564 in Stratford-upon-Avon - On november 28, 1582 the bishop of worcester issued the marriage bond for

Stratford Shakespeare - . fericeán flóra, szabó barbara 9.c. „to be or not to be that is the

Beautiful Stratford - . stratford-upon-avon. in south warwickshire, england lies on the river avon has some 23,000

Avon… - . structure. how does the orientation of the story engage the reader? what complications occur in the story

THE STRATFORD RESIDENCES - Famous for being the tallest residential tower in the philippines, the stratford residences at