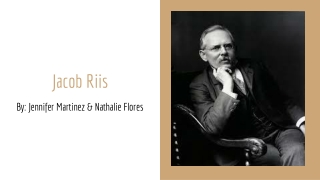 Jacob Riis. By: Jennifer Martinez & Nathalie Flores. Background. Jacob Riis was born in Ribe, Denmark in 1849, he immigrated to the United States in 1870 at the age of 21. Riis was very poor and had various jobs until he became a police reporter for New York city’s lower east side. Jacob Riis - . how the other h alf lives. 5 cents a spot. the only slide the kids had to play on…. . child laborer in a

Jacob Riis - . harrison richlin jaime ortega. riis’ years of journalism. jacob was born on may 3, 1849 he died on may

Jacob Riis - . he worked to improve city living conditions. he also wrote a book called “how the other half

Jacob Riis and Camilo José Vergara - . presentation by cheri fakes. jacob riis: the man. jacob riis was the third of

Jacob Riis and Jane Addams: City Reformers - . jacob riis spent his life documenting the lives of the poor and

Jacob Riis How The Other Half Lives - . photo analysis questions. directions: you will analyze the pictures. you will use

How The Other Half Lives Jacob Riis 1890

Jacob Riis and Progressive Reform of the Modernist Period - . jacob riis was a danish-born muckraker, or journalist, who

How the Other Half Lives , a photo essay by Jacob Riis - . jacob riis was a danish-born muckraker, or journalist, who

Andreas Riis Olsen - Attended the university of utah from 2007 to 2009. in two short years, andreas riis olsen was able

Jacob - . story line. twin sons, esau and jacob, were born to isaac and rebekah. esau, the firstborn, sold his birthright