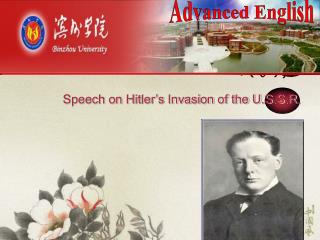 Advanced English. Speech on Hitler’s Invasion of the U.S.S.R. World War II: (1939 -1945) The conflict resulted from the rise of totalitarianism, fascism in Germany, Japan and Italy (the Axis vs. the Allied) Important Events July 7, 1937 Japan invaded Central China. Sep. 1938 Topics in English Syntax An Introductory Course - . topics in english syntax. bibliography the following works have been

Advanced English - . lesson one. face to face with hurricane camille. lesson one. aims. to know the writing technique of

Middle English: What kind of a language is it? - . a brief review: how we got there? i.e. how middle english came into