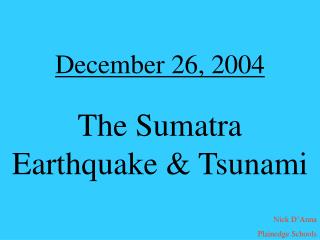 December 26, 2004 The Sumatra Earthquake & Tsunami. Nick D’Anna Plainedge Schools. Great Wave off the Coast of Kanagawa, by Hokusai This print is somewhat misleading in that tsunamis do not always manifest themselves as the huge breaking waves. What is a tsunami?. The Science behind the Earthquake and Tsunami of Dec. 26, 2004 - Rob mccaffrey rensselaer polytechnic institute stanys