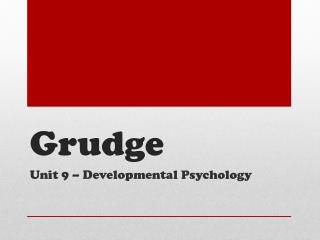 Grudge. Unit 9 – Developmental Psychology. A human organism from after the embryonic stage until birth. Fetus. Awareness that objects still exist when out of sight. Object Permanence. Piaget’s second stage where children learn to use language and demonstrates egocentrism. Grudge - . unit 10 – motivation . this american psychologist believes everyone must progress through a hierarchy of

GRUDGE MATCHES!!! - . got a grudge to settle?! wanna have some fun doing it?! well let us help!! challenge them to a

The Grudge Holder - . the grudge-holder suffers from an unusual kind of wound. although a grudge is associated to a past

Holding a Grudge - . holding a grudge. the bible tells us not to have grudges rather forgive and forget. “you shall not

The “Grudge” Game - . simplifying expressions solving equations. write your name on the board and put 4 x’s

FROM GAINSVILLE, FLORIDA TO ST. MAARTEN! JEROD CALDWELL TO FIGHT ON UNDERCARD IN ST. MAARTEN GRUDGE MATCH BETWEEN ROY

Bell Work - . in a paragraph, describe a time when you held a grudge against someone or when someone held a grudge

Forgiveness Part 3 - . how we are to forgive others. we must forgive as god forgives. ephesians

Lessons from Joseph: Guard Against Bitterness - . “what if joseph holds a grudge against us and pays us back for all