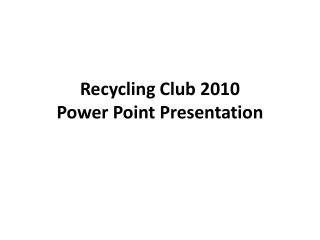 Recycling Club 2010 Power Point Presentation. Recycling Club 2010. How it started?. Stephanie Garcia has always been conscious of the environment. Her father works for the California Conservation Core, and he always impressed upon her the importance of taking care of the world around her. A First Look at ML - . additional information programming in ml a gentle introduction to ml. download as power point file

Ancient China - . note taking. step one : listen to the teacher for emphases on important points in power point. copy

Consciousness actions on How to save and protect water - . name : catarina oliveira, patrícia rumor class : 4i nr :