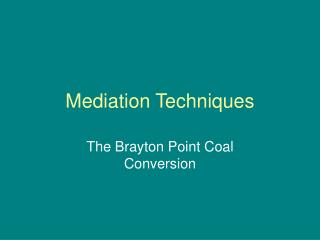 Mediation Techniques. The Brayton Point Coal Conversion. Introduction. This chapter considers what the mediator brings to the bargaining table that the parties cannot provide on their own. Mediators are sometimes called interveners, neutrals, or third parties. NPA: Business Improvement Techniques Contributing to the Application of Workplace Organisation Techniques - . aim of the

Clustering Techniques - . clustering outline. goal: provide an overview of the clustering problem and introduce some of

Techniques of Propaganda - . aesthetics, emotion, and argument. making a wildlife documentary – a broken