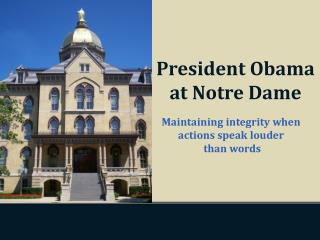 President Obama at Notre Dame Maintaining integrity when actions speak louder than words Overview The announcement that President Obama would be honored at the Notre Dame Commencement precipitated objections, protests and rallies from around the country.

Actions Speak Louder Than Words - Learning objectives : to learn the importance of non-verbal communication in drama. to

Actions Speak Louder than Words - . even as prime minister netanyahu talks of a palestinian state: israel is formalizing

speak louder than - . this page student will learn while enjoying video discussion and educational sites about verb and

When Actions Speak Louder than Tweets: Using Behavioral Data for Decision-making - . bundle.com is a nyc based start-up

Senior living and wellness: Numbers speak louder than words - Why this webinar?icaa partner advisory board. . . senior

Action Speaks Louder than Words - Non-verbal communication is as essential in any interview as the words you say. in

Fukuoka Engagement Ring Will Be Louder Than Words