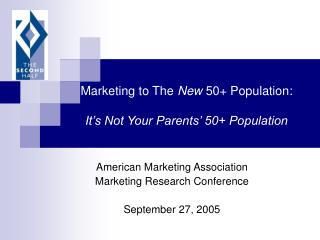 Marketing to The New 50+ Population: It’s Not Your Parents’ 50+ Population. American Marketing Association Marketing Research Conference September 27, 2005. Does this look familiar to you?. Which group includes your age? 18-24 25-34 35-49 50+ What’s wrong with this picture?.

What is Marketing - . dr. vesselin blagoev. a simple model of the mktg process. understand the marketplace and customer

Unit II - . population &amp; migration. demography is: . a) the study of the relationship between government and

Unit II - . population &amp; migration. demography is:. a) the study of the relationship between government and

Unit 3 Marketing - . learning objectives. to define marketing and explain the elements of marketing to understand the