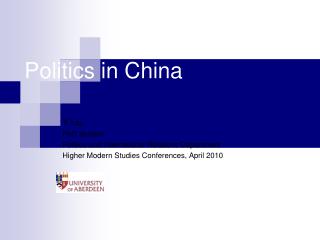 Politics in Mao’s China - . main goals. national unification country had been through civil war had been divided by

Culture,Economt,Politics,Language,Population in China - China is a populous nation in east asia whose vast landscape

Politics of Japan and China - . caitlin mundy. china. china is a communist country and is a single-party republic ruled

Economy,Culture,Politics,Military and population in China - China is a populous nation in east asia whose vast landscape

Politics in Nigeria - . old societies and new state. prominence in the world. larger than britain and france combined

Politics in Germany - . basic law of 1949. ensure that all major parties are represented proportional representation

Participation in Politics - &quot;at a recent concert, madonna told the audience she would strip naked if president