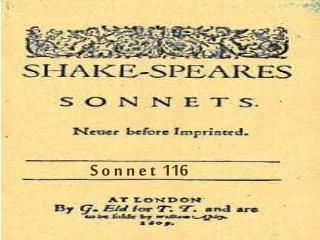 Sonnets - . a sonnet is a 14 lyric poem with a single theme. each line in a sonnet is usually in iambic pentameter (five

Romeo and Juliet - . act 2. prologue. the chorus delivers another short sonnet it describes: the new love between romeo

What is a Sonnet? - . understanding the forms, meter, rhyme, and other aspects of the sonnet. sonnet form. a sonnet has

Romeo and Juliet - . act 2. prologue. the chorus delivers another short sonnet it describes: the new love between romeo

Sonnets - . another rousing presentation by your enthusiastic guide into the world of verse, mr. cyphers. what is a

Sonnet 30 - . by william shakespear. powerpoint presentation by carlos mendoza. when to the sessions of sweet silent

Forms of Poetry: Ode, Elegy, Sonnet - . ode. purpose: to give praise to any single object or idea. characteristics: can

Sonnet 18: Shall I compare thee to a Summer’s Day? - . by william shakespeare the ultimate love poem?. sonnet. poetry

Sonnet #43 (How Do I Love Thee?) - . elizabeth barrett browning taken from the sonnets from the portuguese. elizabeth