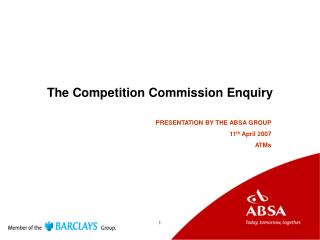 The Competition Commission Enquiry - . presentation by the absa group 30 november 2006. the heart of the matter. south

ZAMBIA COMPETITION COMMISSION - . allegations of excessive pricing of chlorine gas on the zambian market against chemical

The Competition Commission of Mauritius - All about me. british economist; specialist in competition and regulationto

COMMISSION FOR THE PROTECTION OF COMPETITION EUROPEAN COMPETITION DAY 2.10.2012 - . christiana sideri director of the

Card and Interchange Hearings with the Competition Commission - . 19 april 2007. there are significant benefits to

Enquiry Letters - . unit 4 , part 1. introduction. letters of enquiry describe what the writer wants and why. the more

Product Enquiry - With this product enquiry magento extension, customer can submit inquiry and ask question about any

Enquiry overview - Enquiry 5 to what extent did women have different views, aims and aspirations throughout the