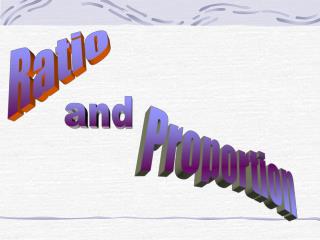 Ratio. and. Proportion. Ratios. A ratio is the comparison of two numbers written as a fraction. For example :. Your school’s basketball team has won 7 games and lost 3 games. What is the ratio of wins to losses?. Ratio Golden Ratio Fibonacci - . ratio. ratio is a way of showing the connection between two or more numbers. a ratio can

Ratio - . honors math – grade 6. key concept ratio. a ratio is a comparison of two quantities, a and b , by

Ratio - . ratio?. ratio is a way of comparing two or more quantities e.g. number of red smarties in a box compared to

Ratio - . comparison of two numbers expresses the relative size of two quantities as the quotient of one divided by the

RATIO - . their ears ought to be smoking when they exit your room. -chancellor robinson.