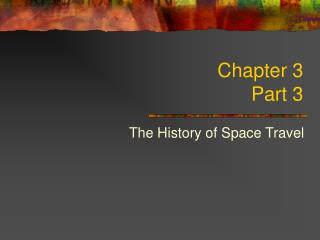 Chapter 3 Part 3. The History of Space Travel. Skylab. America's first space station , Skylab , was launched in May 1973 by a Saturn V rocket in the compartment that served as the third stage for the Apollo missions.

Multimodal Transportation: Chapter-3 Part-3 - The frost & sullivan report forecasts that the share of railways in

Chapter 3 Section 3 part 1 - . mixtures. this illustrates the “particles” in each of the following:. mixtures .

Chapter 6 Part 3 - . x-bar and r control charts. attribute data. data that is discrete discrete data is based on

Chapter 4 Part 3 - . the cell wall of prokaryotes: peptidoglycan and related molecules. things to look up. general