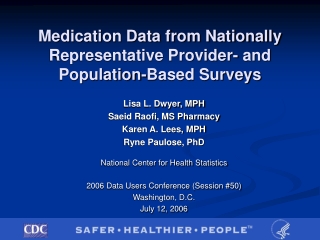 Comparisons of injury estimates from a population-based survey and provider based surveys - U.s. department of health and

Surveys and Population-Based Studies - . definition of a

Preliminary Report of Findings from Consumer and Provider Surveys - . based on responses received by august 31, 2015.

Data Products from Public Surveys@ESO - . the data products from a ps consist (mostly) of astrometrically and

Surveys and data collection - . guidelines and suggestions for answering your questions with survey data . overview.

Understanding Data and Surveys - Decisions. the marketing department claims that 24-39 year olds should be the target