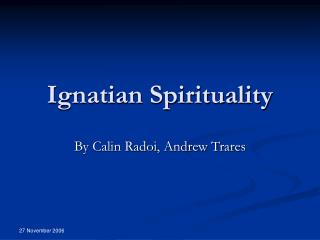 Ignatian Spirituality &amp; Ecology - . sandie cornish the loyola institute. overview. background to we live in a

Ignatian Contemplation - . imagination as doorway to scripture. st. seraphim of sarov. 2 corinthians 3:18. and we all,

Ignatian Leadership - . in your opinion. what are some of the qualities a leader of the future needs to have in order to

An Ignatian “ Kobyashi Maru ” - . ignatian indifference and the no-win scenario . this presentation . . . is meant to

Spirituality: - . the key to powerful service!. questions. are your members willing to take risks for god? are they

Spirituality - . i was curious why this was such a small slice of my “wheel of life.” i was a little scared to pursue

Spirituality - Are you facing the health problem? if yes meditation is the best option for you .it is the scientific

SPIRITUALITY - What we do with our life-energy: the “spirit” in which we live. spirituality. undirected. channeled.