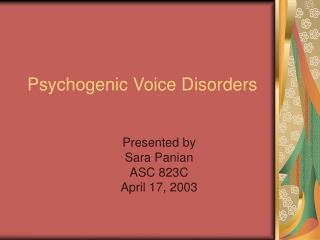 Disorders of the voice - . د مازن المهجه. vocal fold polyps. a true vocal polyp is a benign swelling of

Psychogenic Causes of Crime - . chapter 6. psychogenic causes of crime. individualistic theories of crime focus is on how

Voice Disorders Due to Nerve Damage - . vocal fold paralysis. inability of one or both folds to move because of the lack