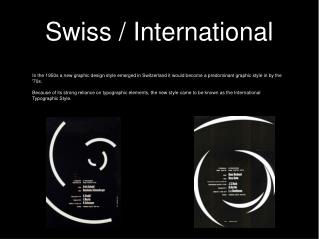 Swiss / International In the 1950s a new graphic design style emerged in Switzerland it would become a predominant graphic style in by the '70s. Because of its strong reliance on typographic elements, the new style came to be known as the International Typographic Style.

“THE SWISS CHEESE THEORY” - . the theory states that we are all a piece of swiss c heese. the holes in our cheese

The Swiss Contribution to Poland - . dominique favre head of the swiss contribution office.

http://horlaxendeutschland.de/formula-swiss-cbd-oil/ - Formula swiss cbd oil is the best choice to use. it is the