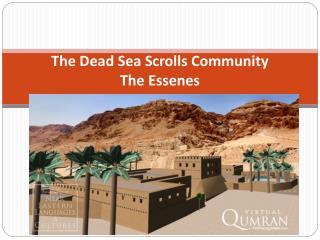 The Dead Sea Scrolls - . what are the dead sea scrolls?. remains of over 800 ancient manuscripts written in hebrew,

The Dead Sea - . location/formation. located between jordan, the west bank, and israel. just outside of the traditional

The Dead Sea - . dead sea started its formation millions of years ago with the forming of the great rift, also known as

Braving the Dead Sea - Athletes and eco-activists swim across the dead sea, the first people to thrash their way over a

Saving the Dying Dead Sea - . lexia chadwick 22 april 2014. the uniqueness of the dead sea. lowest point on earth at 427

Death of the Dead Sea - The dead sea is shrinking, and as its waters vanish at a rate of more than one meter a year,

Dead Sea - . bárbara modesti and lucas presotto. localization. located in the jordan valley, the jordan river is the

DEAD SEA - . the lowest spot on earth. background. located in the middle east, between jordan and israel. top surface of