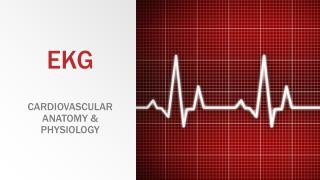 EKG. Cardiovascular Anatomy & Physiology. Basic Heart Anatomy. The heart is a muscle made of 3 layers Pericardium aka = pericardial sac is a connective tissue layer around the heart Epicardium is the smooth outer surface of the heart

EKG - . cardiovascular anatomy &amp; physiology . basic heart anatomy. the heart is a muscle made of 3 layers

EKG lab - Ekg readings. there must be a full 12 leads recorded and labelled plus a rhythm strip, usually from lead ii.

EKG - . mike clark, m.d. topics . what is an ekg what is the lead system the ekg paper ekg mounting standard ekg waves

Vectors and EKG’s - . chapters 11, 12, and 13. electrocardiogram (ecg). depolarization wave passes through the heart