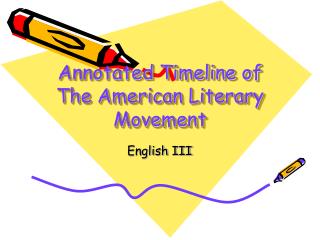 Timeline of American Literary and Historical Events - . remember! copy the words that are bold and underlined . for an

Annotated Timeline of European History - . golden age of greece. greece developed on the balkan peninsula and

Latin America: Annotated Timeline - . chapter 8. what to include picture to illustrate event describe event what happened

Modernism The Literary Movement - . literary movements in america. what is a literary

Literary Movement Basics - . primary areas of value. each literary movement we will study will emphasize the importance