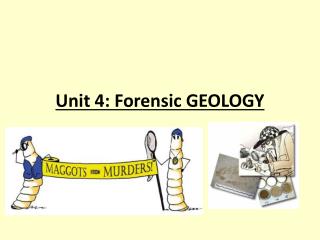 Unit 4: Forensic GEOLOGY . Geology is the study of the earth. . The earth is divided into many layers Starting with the center of the earth we have the core , which is split into an inner core and an outer core . Forensic Geology - . the legal application of earth and soil science characterization of earthen materials that have been

Forensic Science Unit 4 - . entomology. what is forensic entomology?. entomology is the study of insects. insects

Forensic Science Unit 4 - . forensic biology: day one entomology. get out your time of death packet. if you turned it in

Soil and Forensic Geology - . what is soil?. mixture of organic and inorganic material may range from 100% inorganic

GEOLOGY UNIT REVIEW - . by mrs. susan dennison 2012-13. what is a landform ?. a landform is a physical feature of the

Forensic Science Unit - . s1 science. in this course you will be training up to be crime scene investigators. you will

Unit 6: Forensic Anatomy : - . fingerprints. fingerprint evidence is one of the most positive investigative means of

Unit 5: Forensic Anatomy : - . this unit will cover the various body systems that can be used for forensic identification

Planetary Geology – Part 4 - . comets. comets are created of matter left over from the formation of the solar system