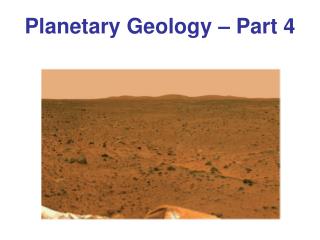 Planetary Geology – Part 4. Comets. Comets are created of matter left over from the formation of the Solar System Comets are composed of ices (water, ammonia, methane, carbon dioxide and carbon monoxide) that hold together pieces of silicate rock and dust. Comets. Planetary Geology - . planets rock!. goals. what determines why planets look the way they do. what are the 4 main process

PART 4 - . ideology and citizenship to what extent should my actions as a citizen be shaped by an ideology?. chapter 13.

Unit 4: Forensic GEOLOGY - . geology is the study of the earth. . the earth is divided into many layers starting with

PART 4 - . quantitative research methodologies. to behold is to look beyond the fact; to observe, to go beyond the

Terrestrial Planetary Geology: Basic Processes &amp; Earth - . what are terrestrial planets like on the inside?.

Part 4 - Engaging through learning communities. culture of literacy and numeracy. part 4. culture of inclusion. the

Part 4 - . the ministry of worship leader. people are looking to connect with god. people expect to find god in church.