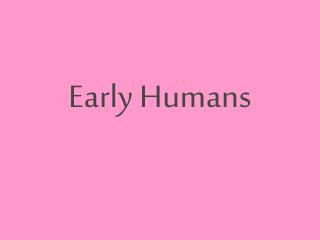 Early Humans. What is history?. Story of humans in the past. What do archaeologists do?. Hunt for evidence buried in the ground. What do anthropologists study?. How humans developed and related to each other. What is the earliest period of human history?. The Stone Age. AIM: How did early humans survive? - . do now: how do we know people lived thousands of years ago??. hw: using the notes,

Early Man - . the dawn of man and the rise of civilization!. australopithecus “ southern ape”. the first true

Prehistoric Peoples - . today’s objectives. by the end of this lesson, you will be able to answer: types of early

Early Humans - . aim: how can we use timelines as a tool for studying history?. do now: fill in the blanks. a decade =

Early Civilizations - . early humans what we know about the earliest people comes from the things they left behind.

Impact of Computers on Society - . 10. ethics – let’s talk about this early in the semester. empathy. human beings

AIM: What have scholars learned about the ancestors of humans, and how have they done so? - Unit essential question: what

The Origin of Humans - . living in the stone age. early discoveries. differing human migration theories. are we all

Bell Ringer - . name one major event that happened over christmas break…(think of things you heard about on the news).