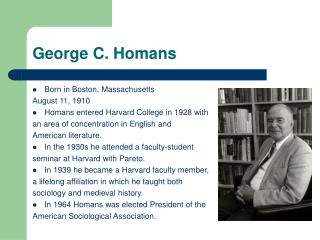 George C. Homans. Born in Boston, Massachusetts August 11, 1910 Homans entered Harvard College in 1928 with an area of concentration in English and American literature. In the 1930s he attended a faculty-student seminar at Harvard with Pareto.