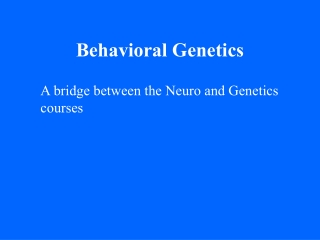 Behavioral Genetics. A bridge between the Neuro and Genetics courses. Behavioral Genetics. Many news sources are filled of late with evidence (some of it pretty good, but needing careful interpretation) for genes that determine or affect certain behavioral abilities.

Nature vs. Nurture: Behavioral Genetics and the Law - . by kathryn baker. the gene x environment interaction. the formula

Bottom(s) Up! A biological approach to behavioral genetics - . two approaches to human genetics. phenotypic effects of

Behavioral Genetics Research The most commonly studied traits are: - Extraversion (individuals who are outgoing and

Bottom(s) Up! A biological approach to behavioral genetics - . two approaches to human genetics. melancholia. 2009. the

Behavioral - / learning theories. our responses and behaviors which constitute personality are learned we learn to

Genetics - . probability and punnet squares. objectives. by the end of class you will know: how to indicate the

GENETICS - . unit 7. allele. how we inherit our genes each human offspring inherits one maternal set of 23 chromosomes

Genetics - . genetics. what is genetics ? study of inherited traits what is heredity ? passing of traits from