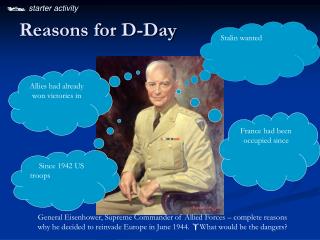  starter activity. Reasons for D-Day. Stalin wanted a second front in Europe to ease the pressure on his troops fighting in East. Allies had already won victories in North Africa (1942) and Italy (1943). France had been occupied since 1940, the time had come to liberate the country.

D-Day - . by greg perez. where to strike. planning for operation overlord took more than two years of planning. allied

D-Day - . by: phoebe kishbaugh, grayson bidel, and nathan nash. preface. the phase of the moon (full) and the level of

D-DAY - D-day ships slide by teylor jenkins. there was over 7,000 ships used in d-day. some of the initials for these

D-Day - Lucas and t yler . d-day. importance of d-day. the success of d-day allowed the allied forces to build a harbour