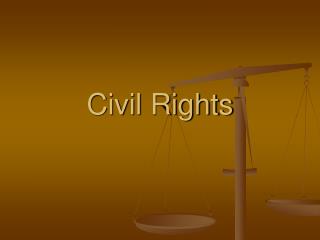 The Chinese in the Courts: The Fight for Civil Rights - . asian americans and the law dr. steiner. stephen field. born in

“I Have a Dream” A Look Back at the Civil Rights Movement Through Pictures - . nathan bedford forrest. ku klux klan

Civil Rights and Responsibilities - . citizenship. a citizen is an individual with certain rights and duties under a

EOCT Practice Last Chance - . what prompted kennedy to push for changes in civil rights prior to 1964? a . the

EOCT Practice Last Chance - . what prompted kennedy to push for changes in civil rights prior to 1964? a. the

Civil Rights - . 1950 - 1968. where did legal segregation come from?. plessy v. ferguson the state of louisiana enacted a