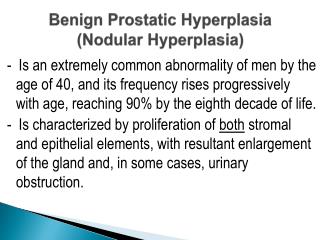 Benign Prostatic Hyperplasia (Nodular Hyperplasia). - Is an extremely common abnormality of men by the age of 40, and its frequency rises progressively with age, reaching 90% by the eighth decade of life. Benign Prostatic Hyperplasia - . objectives. upon completion of this cme activity, the learner will be able to:

BENIGN PROSTATIC HYPERPLASIA - . this disease is described by ancient physicians such as avicenna, paracelsus and others.