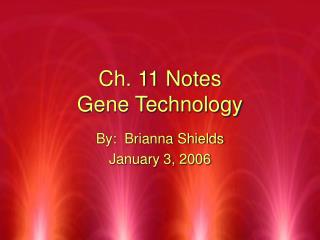 Ch 11 – Gene Expression - The control of a gene at transcription, translation for even the polypeptide. . prokaryotes

Ch. 13 Gene Technology - . recombinant dna take dna from 1 organism and cut out desired gene. cut a hole in the organism

Ch. 11 Notes - Genetics - . i. who was gregor mendel?. a. gregor mendel - austrian monk who studied how traits a re

Ch. 20 Notes: DNA Technology - . recombinant dna. dna that is artificially made with specific gene sequences added to it

U.S. History Ch. 11 Notes - . the civil war. 1) although the south had many experienced officers to lead its troops, the