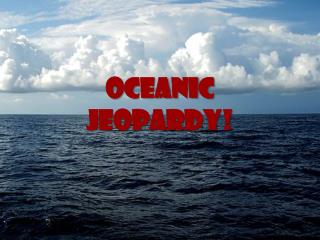 Oceanic Jeopardy !. Oceanic Jeopardy !. How did the crew of the HMS Challenger map the ocean floor?. By lowering a weighted line until it touched the bottom... Over and over again. What are three factors that make ocean exploration difficult?. Welcome - . to. jeopardy!. science. butterfly jeopardy. second grade. final jeopardy. round 1. round 2. what makes me

JEOPARDY - English colonies. jeopardy. contestants. don’t forget. …always phrase your answers in the form of a

THIS IS - Jeopardy. this is. created by: chad sims jason sells. to double jeopardy. to final jeopardy. jeopardy. green

Physio Jeopardy - . your host: alex jeff gotrocks. physio jeopardy. why this for $100. we need to study this in order to