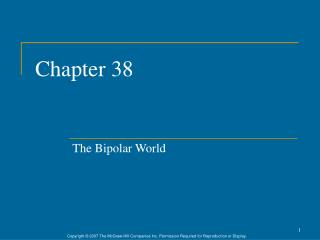 Chapter 38 - . angiosperm reproduction and biotechnology. figure 38.1. plant reproduction. overview: to seed or not

Chapter 38 - Microbiology and parasitology as disease processes. chapter 38. microbiology. the study of microorganisms

CHAPTER 38 - . the kennedy presidency. as john f. kennedy ushered in the 1960s, it also ushered in a sexual revolution, a

Chapter 38 - . origins of the cold war. cold war. was the political, economic, military and cultural conflict between the

Chapter 38 - . diffraction patterns and polarization. diffraction. light of wavelength comparable to or larger than the

Chapter 38 - . digestive &amp; excretory system. what is the first part of food digestion? makes contact with your

Chapter 38 - . agents that affect immunity. immune system functions. recognize and dispose of foreign material such as: