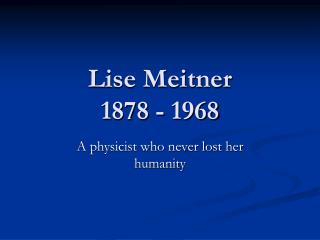 Lise Meitner 1878 - 1968. A physicist who never lost her humanity. The most significant woman scientist of the 20 th century. Born in Vienna, Austria in a Jewish family First person to realize that the nucleus of an atom could be split into smaller parts. Lise Meitner - . by: landon miller. lise meitner’s childhood. when meitner was little, she liked mathematics and

lise - Once upon a time… the tales of life

1968 - . how not to cross cultures. what is culture. cumulative deposit of knowledge shared by a relatively large group

1968 - . chapter 29.3. main idea. as the vietnam war dragged on and increasingly appeared to be unwinnable, deep