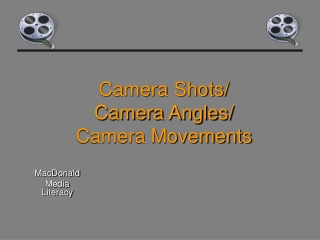 Media Techniques - . learning intentions: learn about the different camera angles and the impact on the viewer. camera

Camera Shots and movement - . as media studies. camera shots. how the image, character or object is framed on the screen.

Chapter 2 - . the camera. capturing a great photo, in camera, is the skill. printing a perfect photograph is the art. “

Camera Calibration - . camera calibration. issues: what are intrinsic parameters of the camera? what is the camera

Dashboard camera - Do we need camera in the car? how about a night vision camera. use by policeman and fire fighter this