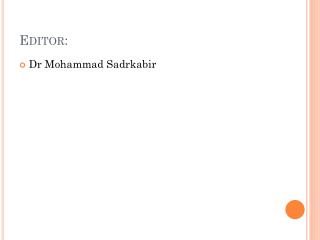 Flooding in Bangladesh - Assessment task: you are a photo editor for a news organisation who is putting together a

The Future of DDC Is Now! Uncovering the Mysteries of DDC 23 and Beyond - . ilf conference 15 november 2011 ft. wayne,

Overview of Quantitative Finance and Risk Management: Past, Present, and Future Frontier - . by dr. cheng-few lee

Viral Hepatitis B and C Epidemiology and management to Prevention - . seyed moayed alavian m.d. professor of