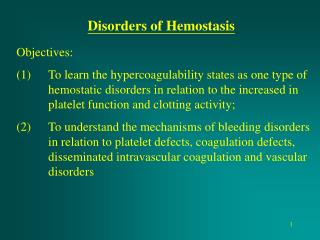 Disorders of Hemostasis. Objectives: To learn the hypercoagulability states as one type of hemostatic disorders in relation to the increased in platelet function and clotting activity;

Psychological Disorders - . the most common types of disorders. today we will discuss the disorders that really change