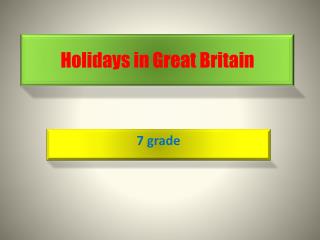 Industrial Revolution in Great Britain - . october 14-15, 2013 objective: students will analyze how invention and

LIFE IN GREAT BRITAIN - . the flag of the uk nickname: union jack. a typical school year in britain . starts at the

Festivals, Holidays and Sports in Britain - . sports- football. although various countries had some form of football at

Great Britain - . britain is an island in the atlantic ocean and it is situated in the north-west of europe. starting