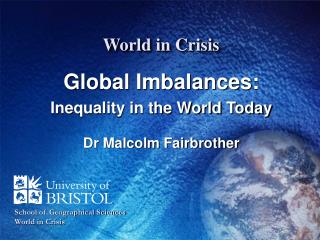 A World Crisis - . the main idea rivalries among european nations led to the outbreak of war in 1914. reading focus what

World Water Crisis - . by: sydney, cj, kaitlin, elly. what is it?. the world need for water and how it is in short supply

A WORLD CRISIS - . the great war. europe cared more about the archduke’s death than america did. in five weeks, war was

Crisis Around the World - . chapter 27. soviet union. communists blend of karl marx and lenin rule by the proletariat

The World Food Crisis - . fred magdoff fmagdoff@uvm.edu. 1.) there is a catastrophic food crisis. 2.) in addition to

Rape Crisis in Crisis? - . dr helen jones manchester metropolitan university h.jones@mmu.ac.uk. who, what, why, when?.

Learning from Women for a World in Crisis