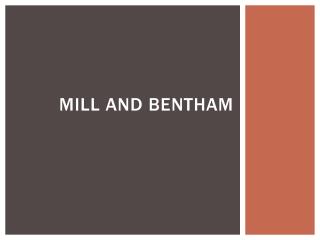 Jeremy Bentham and John Stuart Mill - . the utilitarians. presentation overview . a brief history of england from

Bentham, Mill and Dupuit : The Rise of Demand in Classical Theories of Value - . eco54 history of economic thought udayan

Jeremy Bentham and Utilitarian Ethics - . pain and pleasure are the measure. the principle of utility. bentham sought to

Jeremy Bentham: Psychological Hedonism - . an account of human nature is necessary in order to describe morals and

Mill - . the defense of basic liberties i. of the liberty of thought and

BENTHAM AND HOOKER’S SYSTEM OF ANGIOSPERM CLASSIFICATION - . introduction. classification denotes the arrangement of

The difference between rod mill and ball mill

Mill - . the harm principle i. on liberty.