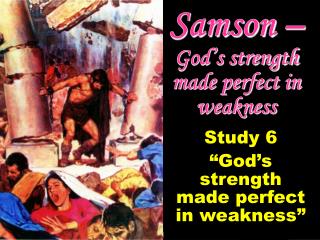 Approach to Weakness - Weakness. reduction in the power that can be exerted by one or more muscles.. weakness . parts

Samson – God’s strength made perfect in weakness - . study 2 “a nazarite unto god from the womb”. the camp of

God’s Power through Weakness 2 Kings 5:1-19 - . and he said to me, my grace is sufficient for you, for my strength is

His Strength is Perfect - . Ó 1988 sparrow song arr ics ubp. i can do all things through christ who gives me strength.

Samson, The Strongest Weak Man In The Bible - . judges 13-16. hope for us all. honesty of biblical writers. whether

FAITH MADE PERFECT - . the development of abraham’s faith genesis 12-25. faith must grow. faith can be made perfect by

Autorecording with a Samson Zoom H2 recorder - . this guide provides instructions on how to use a samson zoom h2 to

A Study of the subject of grace - . based on “sufficient grace” by jim o’conner. grace - introduction. “and he