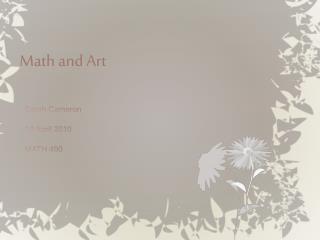 Math and Art. Sarah Cameron 12 April 2010 MATH 490. outline. Introduction We will look at math as shown in the art of: Leonardo da Vinci Helaman Ferguson Peter Wang Discussion. Math in art. Math can commonly be seen in art through the use of: Patterns Fractals Tesselations.

Dr. Math - . doodlebuddy. how good are you at solving math problems. you will use doodle buddy to solve a math problem.

St. Lucie Math Routine - . july 2011. goals for today. math initiatives. the purpose of the math task force was to review

Research-Based Math Interventions for Students with Disabilities - Math is right up there with snakes, public speaking,