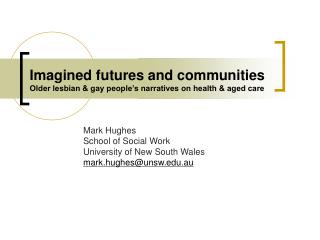 “Hope I die before I get Old:” Aging in America - . media representation. &quot;how this country thinks of

Active for Later Life - . making the case for physical activity and older people. what do we mean by ‘older people’?

Respecting DIGNITY and RIGHTS - . the plan. i. the rationale . life-bearing . the objective. the first responsibility,

The Role of Online Communities in Diabetes Management - . using social networking to improve self-care and standards of

Health Care Reform: How we got here and where we need go - . biaoh annual conference november 2, 2010 jerry friedman, jd