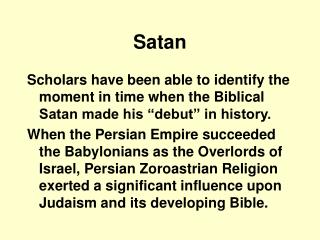 Satan. Scholars have been able to identify the moment in time when the Biblical Satan made his “debut” in history. When the Persian Empire succeeded the Babylonians as the Overlords of Israel, Persian Zoroastrian Religion exerted a significant influence upon Judaism and its developing Bible. SATAN - . review. nt focus on our spiritual enemy he is real he is dangerous he is hard to identify he is a schemer he

SATAN - . “so the great dragon was cast out, that serpent of old, called the devil and satan, who deceives the whole

Satan - . sept 3. think about it …. what monster or fictional villain best represents evil to you? satan is a real

Satan - . the bible introduces satan from a point of existence, rather than a point of origin- he is “on the scene”

Satan -- Review - . where do we find a description of satan prior to his rebellion (two primary scriptures)? ezekiel 28

Things Satan Could - . not do to jesus. introduction. last week we gave many warnings about the devices of the devil

Satan – His Works - . introduction. 1 pet. 5:8 be sober, be vigilant; because your adversary the devil, as a roaring

Who is Satan? - . was originally named lucifer, son of the morning, “morning star” later became satan (adversary) and

But Satan Hindered Us - . “therefore we wanted to come to you—even i, paul, time and again—but satan hindered us”