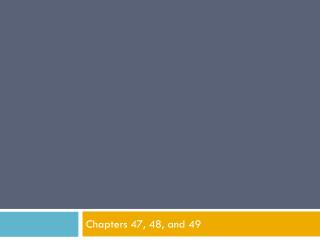 Chapters 47, 48, and 49. Bell Ringer, 8/14. TURN IN ANY WORK THAT YOU ARE MISSING Pick up your Exit Slips on the back lab table Answer the following question on your bell ringer: Explain the difference between a hypothesis and a guess. Bell Ringer, 8/15. Doctrine and Covenants 47-49 - . journals sharing shakers. doctrine and covenants 46 (follow up). gifts…. do you

Quotations ALWD Rules 47 – 49 - . accuracy counts!. you must make sure that the quotation is presented accurately in