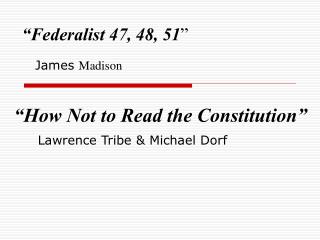 “Federalist 47, 48, 51 ”. “How Not to Read the Constitution”. James Madison. Lawrence Tribe & Michael Dorf . Definitions:. Federalist Supporters of ratification of the Constitution whose position promoted a stronger central government. Anti-federalist. Al-Aulaqi  v. Obama : When Does the President Have the Legal Authority to Target a U.S. Citizen? - . prof. robert f.

Amending the Constitution - . presentation by phil duffy. there are two methods of curing the mischiefs of faction: the

The Federalist Papers - . most countries in the world are unstable. most groups are concerned more with what could

POLITICAL PARTIES - . chapter 11. goal of political parties:. to get candidates elected! to mobilize voters and their

UNIT 4 NOTES: Secession AND THE BEGINNING OF THE CIVIL WAR - . secession. presidents of the united states. george

The Judicial Branch - . alexander hamilton: the federalist #22. we need a third branch of the government that will define