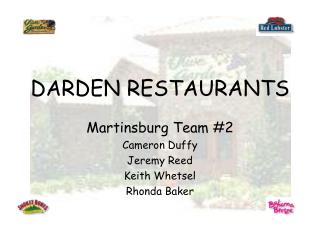 Darden Restaurants : An Advertising Approach - . participate: restaurant coupons are at stake!!!. the beginning of

No Nonsense With Shaney Jo Darden - We're so fortunate to constantly meet inspiring, badass women who embody the

Restaurants - . the stats. owning a restaurant. in the u.s., 935,000 eateries serve more than 70 billion meals and snacks

Restaurants - . class rules. riddle of the day. what goes up and never comes down?. answer:. your age. restaurants of the

Restaurants - Loaded cafe in like manner began offering one of kind breakfast headways and game plans at its restaurants,