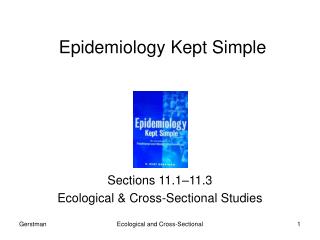 Epidemiology Kept Simple - . chapter 4 screening for disease. identifying cases. “case” ≡ someone who truly has the

Promise Kept - . broken promise. i will send someone to destroy satan’s power and save you from eternal death. isaiah

Best Kept Secret... - The answer to saving money and stretching every hard-earned dollar in good times and

EPIDEMIOLOGY - . epidemiology is the basic science of preventive and social medicine. it deals with the study of disease

Epidemiology - . factors that influence epidemics transmission and the role of nurses in the identification of an